Mufthy Dastgir & Wahid Omarzai both won all 3 match up points 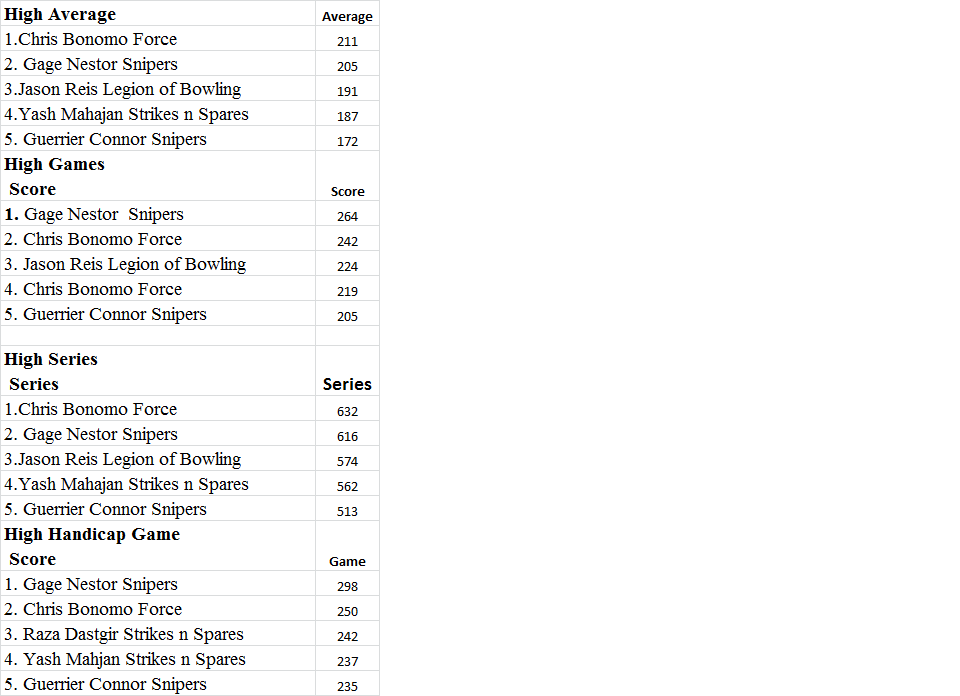 Posted by Unknown at 6:07 PM No comments:

1) Force
Team Force who currently has no championships under their belt decided to make huge free agent signings in the off season. They signed Gerry Kreuder who averages around 210, and Chris Bonomo who has a 200 average. These two players combined with Prince Panicker (avg 178.9) and Vinny Kreuder (avg 176) may be the best team in the entire league. After being the top team in the league last year, Prince made sure his team will compete again. Over the past 4 seasons the Achilles heel for Force has been attendance. If these players show up and qualify for the playoffs, this may be the most dangerous team in SA Bowl history. This team may be the real "Four Horsemen"
Prediction- It is championship or bust for team Force. Anything short of a title is a failure.


2) Strikes n Spares
In my eyes this may be the most underrated franchise in SA Bowl.  Strikes n Spares made 2 consecutives trips to the finals including winning a championship last year. Raza Dastgir and company decided to go fishing in the offseason They were looking for some salmon but instead  brought back a shark aka Yash Mahajan. Yash (average 165) did not bowl in the league last year but he is determined to prove to the league that he can still get it done. Mufthy Dastgir who has an average of 171, just got a new bowling ball and has been doing well with it during practice We should expect huge scores from him this year. A little inside info is that Strikes n Spares has been practicing and Raza's game has improved drastically. If this is true then Strikes n Spares may end up repeating as champions.
Prediction- This team will make it back to the finals for the third consecutive time.


3 Snipers
Snipers has been the doormat of the league the past couple of years but this year may be completely different. Gage has made a lot of phone calls, and has brought back Guerrier Connor(avg183) while signing Justin Reis (avg182). This 3 headed combination can easily put Snipers into their first ever trip to the playoffs. Guerrier and Justin haven't bowled in a while but we expect them to bounce back to regular form in no time. As like Force, Snipers needs to work on their attendance. Already Justin will be missing week 1, which is not a good start for this team. We expect Patrick Vatel to improve in his 3rd year which could be very dangerous, especially with his big handicap.
Predictions- First round loss in the playoffs


4 Balls n Strikes
Is it possible to make it to the final 2 years in a row and be 4th in the power ranking? It is possible when super teams are aligning. Balls n Strikes has a championship under their belt which happened 2 years and is trying to do it again. They bring back their full team with Shumail, Alisher, Hakim, and Wahidddddddd. Every year no one takes this team seriously and every year they prove everyone wrong.. In the offseason they have signed Usman Ghumman who is a good bowler with a lot of championship experience in various sports. Even though super teams are forming with their experience no will be shocked if they can make a run and win it all
Prediction- First round loss in playoffs


5. Guys Will Balls
Guys will Balls are one of the 2 new franchises that have developed this year. Another dangerous team as they bring Jeff Skaferkowsky (177), Joe Disalvatore (162), Amin Sadiqi (153), and Jin Park (160). As like Yash, Jin was not in the league last year so we welcome him back. Jeff who got out to a MVP start last year will need another like performance if he wants to get this team to the playoffs. If you are looking for a balanced team this is the team. They all average in the same range, and they all have playoff experience. The difference may be their sub who is Phil Craig who will be ready to bowl come middle of November. He is a power lefty who has no problem getting in the 200's. This team will be neck and neck with Balls n Strikes to make the 4th seed in the playoffs.
Prediction- Out of playoffs


6. Legion of Bowling
Another new franchise brings the top bowler in the league and Commissioner Jason Reis (212) with a few unfamiliar faces. Jeremy sterling and Tariq Siddiqui are new bowlers who both average around a 100. Chris Bauer was on the championship team Mean Machine and has the potential to really bowl well. We know what Jason will be bowling, but the main factor are the other bowlers. It is most likely Jeremy and Tariq will be getting around a 100 pin handicap each. If they can improve throughout the season and still have their high handicap then this is a dangerous team. The sky is the limit if these bowlers can get better. We hate to say a team with the Commissioner may be in last place, but most likely they will be . The x factor we failed to mention will be if Ahbi Kumar can qualify for the playoffs. If he can qualify they can not only make it to the playoffs but win it all
Prediction- Out of playoffs


Predictions
MVP- Yash Mahajan- There is a new MVP format and Yash has a chance to make this prediction happen.
Most improved- Patrick Vatel- In sports it usually takes an athlete 2 full seasons until we really can see his potential. Expect a big increase in average for Pat
Points Leader- Raza Dastgir
Strikes Leader- Jason Reis
Spares Leader- Prince Panicker
Win %- Jason Reis
Finals- Strikes n Spares vs Snipers.
Winner- Strikes n Spares. Strikes n Spares will make history winning back to back championships.
Posted by Unknown at 9:38 AM No comments:

Posted by Unknown at 9:31 PM No comments: